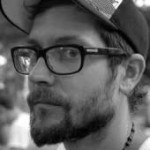 Born in 1976 in Kranj. Graduated from the Academy
of Fine Arts and Design. Specialised in film and
video at the Royal College of Arts in Stockholm.
The founding member of STRUP production. Works
in the field of photography, video, film, animation,
illustration, set design, sculpting, lecturing and art
theory. In the area of film he works as a director,
screenwriter and producer.
FILMOGRAFIE (Auswahl, als Regisseur): 2017 Perseverance;
2015 Four Things I Wanted To Do With
You; 2012 Little Ladybird wants to Grow up; 2006
Let me sleep