A central component of the festival are its various competitions and prizes. The Prize for Best Feature Film and the Audience Award have existed since 2003 and the Prize for Best Documentary since 2005. Relatively new, since 2016, are the School Pupil Jury Prize (made up of candidates from around the Austrian/Italian “Euregio” Region) and also, in partnership with IDM Südtirol/Alto Adige, the competition “Final Touch”. The festival’s annual Prize for Outstanding Film Career has also existed since 2016.

8 new Italian, Austrian, German and Swiss documentaries, selected by the festival team, compete for this “Sparkasse Foundation Prize for Best Documentary. The winning film in this category is also chosen by a 3-member jury and, equally, the victorious director is awarded €5,000.

All competing films (whether features or documentaries) are also voted for by normal cinemagoers, with a system of ballot cards determining the people’s favourite. The Audience Award, funded by the City of Bolzano/Bozen, comes with €2,000 in prize money for the victorious director.

Each year, the Bolzano Film Festival Bozen honours a special guest with the support of the city’s department of transport.

Our team selects 5-6 films from the festival’s entire feature, documentary and short film programme which are both appropriate and engaging for young people over the age of 17. The “Euregio” school pupil jury is made up of 3 pupils from South Tyrol, Trentino and Tyrol in Austria who are in their penultimate year of high school. They work together with two mentors to award the Euregio School Pupil Jury Prize. The winning film will then, in the following year, be shown around all three Euregio regions in the presence of both jurors and the director.

This is a competition which offers young filmmakers support in finishing their film projects. Applicants from Italy, Austria, Switzerland and the year’s designated guest country at the festival, who have a film project in its final phases, are welcome. Eligible applicants will have cinema-length films in either the feature or documentary categories, which currently exist as at least a rough cut and require further creative/artistic input, marketing projections and analysis or indeed financing. Two members (usually directors, producers or editors) of each of the up to four successful film teams are then invited to meet a team of experts for intensive feedback sessions during the festival. 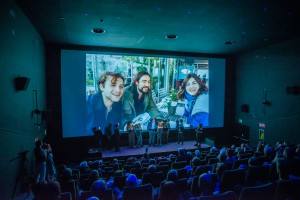