“The ‘Filmtage Bozen’ [‘Bolzano’s film days’] first appeared in 1987, however there had of course already been less ‘official’ film days here before this date. In 1982, journalist Elisabeth Baumgartner had already successfully pushed for Filmclub to show a large series of films to celebrate local legend Luis Trenker’s 90th birthday and thus give him his first homage in South Tyrol. Furthermore we had already managed, in 1984, to bring a Hollywood great like Vienna-born Fred Zinnerman to Bozen. His global hit, HIGH NOON (starring Grace Kelly and Gary Cooper) as well as JULIA (with Jane Fonda) were amongst the films screened.

Due to the initial skepticism of German film distributors in the 80s, a lot of effort was made to persuade them to bring arthouse films to South Tyrol/Italy. This meant that in those days we really had to show the distributors in Munich and Vienna that we would handle their films appropriately and even prove that we would return them as promised. To that end, we invited them to Bozen, too… Let’s just say our persuasion definitely worked its wonders!

From 1987 onwards, the ‘BOZNER FILMTAGE’ were held every April, initially with the active support of Christian Friedel and his distribution company ‘Filmwelt’. He had previously been head of distribution at ‘Filmverlag der Autoren’ and his history included work like Achternbusch’s films. In fact, Herbert Achternbusch himself heavily influenced these early film days and his films were present in each year’s festival lineup. Annamiri Bierbichler and Gabi Geist were of course also part of it all! And Peter Goedel, whose films we had discovered at the Film Festival in Hof, was also a welcome guest. Naturally, Rosa von Praunheim was always present, not to mention South Tyrolean filmmakers like Carmen Tatarotti, Kurt Lanthaler, Edith Eisenstecken, to name but a few.

As we only had a small room available at 20 Dr.-Streiter-Gasse, the programme was rather compact. There was also ‘Kino Latemar’ up in Welschnofen and it attracted a large section of the viewing public, often bringing their own guests, to weekends under the motto of ‘Films and Hiking’.

The political changes issuing from the Fall of the Berlin Wall in 1989 were also felt by our festival. Big names from the GDR film scene arrived, such as Helke Misselwitz and documentary filmmaker Volker Koepp. This was the time of our first contact with the Dresden Film Festival. In the 90s, though our festival still was still taking place in the same little 99-seater room, the guestlist nevertheless included such names as Michael Verhoeven, Götz Spielmann, Dana Vavrova and Marianne Sägebrecht. And let’s not forget the Swiss contingent: M. Murer, Karl Saurer, Erich Langjahr, Donatello and Fosco Dubini were also regular sights in the 90s. The start of the 90s also heralded the introduction of Italian productions into our programme: LA FINE DELLA NOTTE (1990) by Davide Ferrario, L’ARIA SERENA DELL’OVEST (1991) by Silvio Soldini, UN’ALTRA VITA (1993) by Carlo Mazzacurati etc. In 1995 we had short films by Federico Fellini, and others by Pier Paolo Pasolini in 1996, not to mention 1995’s BELLA VITA by Paolo Virzi, and the list goes on.

Following the renovation of and our relocation to the Capitol Cinema, from 2002 onwards we finally had three proper screens at our disposal, allowing us to expand our programme appropriately. 2003 saw us get the chance to select films to compete for prizes. The first winner of the South Tyrolean Prize was RESPIRO (Lampedusa) by Emanuele Crialese with Valeria Golino. In 2005, the Sparkasse Foundation Prize for Best Documentary arrived alongside the first city-funded Audience Award, the latter being decided by viewers casting ballots on all the films competing that year.

To this day, our humble ‘Bozen Film Days’ have already developed into an internationally competitive film festival, largely due to the help of active sponsors and, in particular, engaged volunteers. The festival has become a valuable part of the domestic and international film sector and it is adored by the city’s inhabitants. This isn’t simply a result of its location directly on the German-Italian linguistic border, which of course lends it a special multilingual mixture of films and guests but, rather, it is also a result of having created a cosy, intimate film festival in which guests can meet and connect over culinary delights, framed by a glorious landscape. It fills me with pride and joy to see what we have accomplished here!” 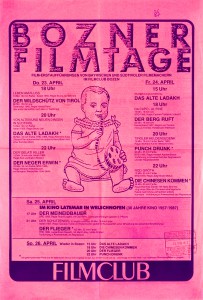